More
HomeNewsForces behind the escalation of anti-Semitism

Ever since extreme right-wing multibillionaire Elon Musk bought Twitter on Oct. 27, there has been an alarming increase of anti-Semitic attacks online and threats of physical violence at synagogues and other places. While laying off a huge sector of workers who helped monitor hate speech, Musk reinstated the Twitter accounts of Donald Trump and other known anti-Semites and virulent racists, known for spewing hatred at Jewish people and people of color. 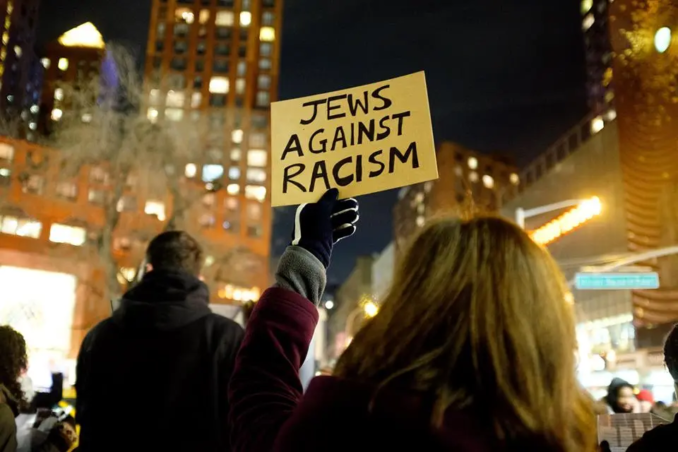 The fascist united march of armed neo-Nazis, KKK and other extreme right-wingers that took place in August 2017 in Charlottesville, Virginia, and the Jan. 6 assault on the U.S. Capitol in 2021 reflect the growing threat of fascism and anti-Semitism inside the U.S., as the permanent instability of the capitalist economy continues to create havoc, panic and fear worldwide. Under such conditions, oppressed peoples become the easy targets for scapegoating for all the ills in a society riddled with inequality.

While anti-Semitism must be confronted whenever and wherever it raises its ugly head, there should be no confusion concerning its origins nor which class it truly benefits — the ruling class. Anti-Semitism, just like racism, LGBTQ+ oppression and misogyny is a worldwide issue, not just a U.S. issue. It emanates from the capitalist system, not from individual athletes or entertainers, and especially not from other oppressed groupings and nationalities.

Recently, Kyrie Irving, the super-talented African American guard with the National Basketball Association’s Brooklyn Nets, was suspended multiple games and fined for promoting on his Twitter account a documentary that questioned the legitimacy of the Holocaust. He has since apologized and removed that feed.

Ye, formerly known as the rapper Kanye West, recently professed his admiration for Adolph Hitler on Twitter. As harmful as such a comment is, it would be wrong to treat it as a root cause of the problem.

The following commentary, written by Shelley Ettinger — a longtime anti-Zionist, pro-Palestine Jewish communist — first appeared online on Dec. 29, 2018, in defense of Los Angeles Lakers forward, LeBron James. Just recently, James criticized the predominant white sports media for not questioning more intensely the 80-year-old billionaire white owner of the NFL’s Dallas Cowboys, Jerry Jones, for a photo he appeared in as a teenager in Little Rock, Arkansas, in 1957. It appears that Jones was a member of a group of racist students threatening to physically block Black students attempting to desegregate a high school.

James was making the point that Jones was treated with kid gloves by the same media that lambasted Irving for not swiftly offering a genuine apology. Jones has never apologized for appearing in the photo.

For the record, Jones has never hired any Black head coaches, and he had threatened his players with dropping them from the team if they showed solidarity with football quarterback Colin Kaepernick, who, in order to protest police brutality, took a knee while the national anthem was played in 2016.

A beloved athlete posts a brief song lyric on social media. Commentators denounce the lyric as offensive and him as a bigot. He says he didn’t know it was offensive and apologizes. What does it all signify?

It signifies that it is in the interests of the capitalist ruling class to foment division and to blame the oppressed as somehow the real perpetrators of bias and bigotry.

The athlete is Los Angeles Lakers basketball megastar LeBron James. The lyric, which he posted to Instagram Dec. 22, included the phrase “Jewish money” from a rap song by the performer 21 Savage he’d been listening to.

Sports Business Daily is owned by Advance Publications Inc., a media conglomerate with vast holdings. These include Conde Nast, which publishes Vogue and Vanity Fair among other magazines; Fairchild Publications, which owns Women’s Wear Daily and other publications; and American City Business Journals, the biggest publisher of metropolitan business newsweeklies in the United States.

SBD is, in other words, a major capitalist media outlet. It posted $2.2 billion in revenues in 2017. Rovell, formerly of the worldwide sports conglomerate ESPN, the Entertainment and Sports Programming Network, is one of its best-known commentators and a right-winger.

In fact, the headline of Newsweek magazine’s Dec. 23 article on this “controversy” characterized James’ Twitter post as “angering conservative critics.”

So a reactionary writer for a website devoted to the profitability of professional sports tries to stir up hostility toward one of the country’s most prominent and progressive Black athletes for an unintended and immediately retracted reference. Although the attempt ultimately fizzled and did not draw in Commissioner Silver, it did gather some support, mostly on Twitter, where dozens of tweets called James anti-Semitic.

The day after his tweet, LeBron James said on ESPN: “Apologies, for sure, if I offended anyone. . . . I actually thought it was a compliment, and obviously it wasn’t, through the lens of a lot of people. My apologies. It definitely was not the intent, obviously, to hurt anybody.” (Dec. 22)

It seems clear, it rings true, that James honestly didn’t know the historical meaning and use of phrases like “Jewish money” as fodder for anti-Semitism. He apologized anyway. What more could he do?

Also on a Dec. 22 episode of his HBO series, “The Shop,” James criticized the majority of white National Football League billionaire owners for having a “slave mentality,” by disregarding the rights of their players, 70% of whom are Black. (espn.com, Dec. 22) James made no apology for this accurate statement.

The issue, in reality, is never what the person did or didn’t say, or how perfectly phrased the person’s apology was. The issue is that it is in the ruling class’s interest to deflect attention from the real source of anti-Semitism: itself.

Anti-Semitism is a very old, very effective strategy to direct the working class’s rage away from the true source of its problems: the ruling class, which is overwhelmingly made up of white, Anglo-Saxon Protestants. It instead portrays Jewish people, a tiny group — only 0.2% of the world’s population — as somehow owning and controlling the world’s wealth by being devious, evil schemers bent on driving workers and the poor into poverty and misery.

While its roots are deep and wide and go back millennia, anti-Semitism flourished during the rise of capitalism in Europe. From 19th-century czarism in Russia through the Nazi genocide, it was skillfully crafted as a tactic to break up revolutionary movements.

To this day, with resurgent fascist organizing again casting caricatured Jewish bankers as the culprit behind workers’ worsening standard of living in Germany, France and other countries, the capitalists wield anti-Semitism as a favored tool.

In this context, the absurdity of portraying oppressed communities as purveyors of anti-Semitism should be clear. Who has the motive and the power to foment attacks against Jewish people? Who poses an actual threat to Jewish people?

The threat is real, as evidenced by the Oct. 27 massacre at a synagogue in Pittsburgh. Emboldened under Trump, previously suppressed elements, the worst violent, anti-Semitic scum, are surfacing and acting in a way that has not been seen in this country for decades. At the same time, racist attacks, already epidemic, are on the rise, whether against Latinx migrants, Black youth or other oppressed people.

The only effective response is unity, first and foremost against racism and against all forms of bias and division, from anti-Semitism to sexism to LGBTQ2S oppression. It’s this unity, rejecting the bosses’ attempts to divert anger away from themselves, that will move the struggle of the workers and oppressed forward against capitalism itself.

The European Union is organizing a conference entitled: "Beyond disinformation – EU responses to the threat of foreign information manipulation." Its main thrust is to seek ways of expunging any trace of a Russia-friendly outlook within the Union. The EU has already censored Russia Today TV channels and the Sputnik agency. It is now extending…
News

Some of the countries the Western media claims are horrific repressive dictatorships are way happier than the U.S. So let me ask: Are you happy? Do you spend a lot of time laughing in the sun? Do you feel at peace in your life? If you live in the U.S., like me, then I’ll bet…
News

The MintPress podcast, “The Watchdog,” hosted by British-Iraqi hip hop artist Lowkey, closely examines organizations about which it is in the public interest to know – including intelligence, lobby and special interest groups influencing policies that infringe on free speech and target dissent. The Watchdog goes against the grain by casting a light on stories…
News

Home » Global » Latin America & the Caribbean » Free Alex Saab! Supporters of Alex Saab gathered inside Grand Central Station in New York City on Jan. 16. The purpose of the demonstration was to “denounce the imprisonment of Venezuelan diplomat Alex Saab; his only crime was evading the illegal sanctions of the North…

The European Union is organizing a conference entitled: "Beyond disinformation – EU responses to the threat of foreign information manipulation." Its main thrust is to seek ways of expunging any trace of a Russia-friendly outlook within the Union. The EU has already censored Russia Today TV channels and the Sputnik agency. It is now extending…
News

Some of the countries the Western media claims are horrific repressive dictatorships are way happier than the U.S. So let me ask: Are you happy? Do you spend a lot of time laughing in the sun? Do you feel at peace in your life? If you live in the U.S., like me, then I’ll bet…
News

The MintPress podcast, “The Watchdog,” hosted by British-Iraqi hip hop artist Lowkey, closely examines organizations about which it is in the public interest to know – including intelligence, lobby and special interest groups influencing policies that infringe on free speech and target dissent. The Watchdog goes against the grain by casting a light on stories…
Stop-Imperialism.com