Despite decades of U.S. blockade/Cuba slowly begins to recover from devastating Hurricane Ian

The following slightly edited article appeared in the Sept. 30 online edition of “Resumen LatinoAmericano and the Third World.” 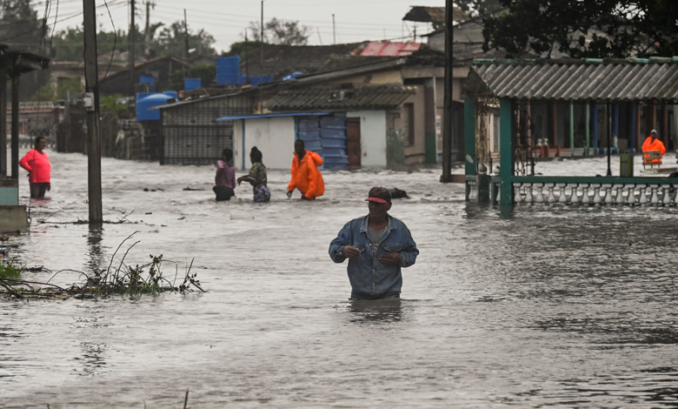 Sept. 29 — Cuba is slowly rising from the aftermath of Hurricane Ian, which left desolate images in the western part of the country. Fallen trees and power lines crossed in the streets are part of the scene of many of the communities that felt the force of its winds, especially Pinar del Río. It is very common to see the same neighbors cutting down trees with axes in hand, sweeping the streets, piling up the leaves that are already beginning to dry on the pavement.

Cuba does not stop, despite the fact that one of Ian’s aftereffects was the almost total collapse of the national electrical grid. Cafeterias are opening their doors as long as daylight permits; people are traveling between municipalities to meet up with relatives; public transportation has resumed its service; the press reports uninterruptedly.

Since Wednesday afternoon and evening, some communities have been recovering their electricity, while authorities of the Union Electrica de Cuba (UNE) are working tirelessly to restart the country’s thermoelectric plants, severely impacted by Ian but also by the shortages and the technological obsolescence.

According to authorities, only 37% of Havana’s customers had electricity at home as of midday today; that is, 316,000 of the 856,000 customers here in the capital.

The commercial director of the UNE in Havana, Leisy Hernández González, explained that most of the damages were caused by cracked poles and conductor cables and damaged transformers. “One hundred-and-twenty-three of Havana’s 285 electrical circuits have experienced breakdowns, while around 80 are in operation,” she explained.

Hernandez added more data: Only 13 of the 25 hospitals in the capital have electricity, and the municipalities most technically affected were Playa, La Lisa and Boyeros.

The figures hurt. There are families who have been without electricity for more than 50 hours and who have resigned themselves to throw away their food, because their refrigerators can no longer withstand being disconnected for many more hours. But, at the same time, there is no dismay.

Authorities are prioritizing repairs in those areas where hospitals, supermarkets and the main food-processing centers are located. Meanwhile, neighborhoods are pulling together. Families and friends of those who haven’t had their service restored yet, offer them any possible space inside their refrigerators to cool their food or power sockets where they can charge their cell phones, so that they are not left out of communication.

When Cubans believe that things cannot get worse, they do. For more than half a century we have been suffering from an economic blockade that prevents us from living in normal conditions; we have been living through an unprecedented pandemic that has left in its wake — along with the blockade — inflation and shortages of food and fuel. For months we have been suffering from programmed blackouts due to failures in the main thermoelectric plants of the country. A devastating fire evaporated a good part of our crude oil reserves.

And now, not even two months later, one of the most powerful hurricanes of the season left two people dead and devastation and pain on the island.

But, once again, Cubans show that no matter how hard the circumstances are, solidarity, hope and the will to overcome the impossible remain intact. For over 60 years, we have lived through the most severe blockade in modern history, and during that time we have learned to be resilient and to adjust to inconvenience, difficulties and complications. Getting back up is part of our character; and while Hurricane Ian has delivered us a powerful blow, we will get through it together as we always do.

Ever since extreme right-wing multibillionaire Elon Musk bought Twitter on Oct. 27, there has been an alarming increase of anti-Semitic attacks online and threats of physical violence at synagogues and other places. While laying off a huge sector of workers who helped monitor hate speech, Musk reinstated the Twitter accounts of Donald Trump and other…
News

Voltaire Network | 5 December 2022 The Ukrainian National Security and Defense Council decided on 1 December 2022 to "prohibit religious organizations affiliated with Russian Federation centers of influence from operating in Ukraine", announced by President Zelensky while signing Decree 820/2022. The “integral nationalists” had already outlawed the Orthodox Church during the Second World War.…

Ever since extreme right-wing multibillionaire Elon Musk bought Twitter on Oct. 27, there has been an alarming increase of anti-Semitic attacks online and threats of physical violence at synagogues and other places. While laying off a huge sector of workers who helped monitor hate speech, Musk reinstated the Twitter accounts of Donald Trump and other…
News